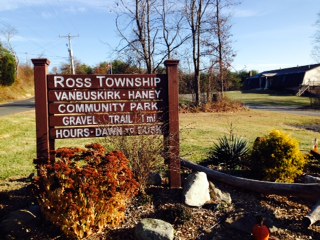 Over the weekend, I had the opportunity to attend a local community playground build in Ross Township, Penna., about 15 minutes from my home. It was an emotional day for many in attendance, as the playground being built was in memory of shooting victims who lost their lives when a man opened fire during a meeting at the township’s municipal building last year.

When I learned that our client, Playworld Systems, was donating equipment for the playground, I was immediately happy. I believe in the company’s mission of saving unstructured outdoor play and touched by the fact that the donation was going to one of my local communities that had been rocked by tragedy. 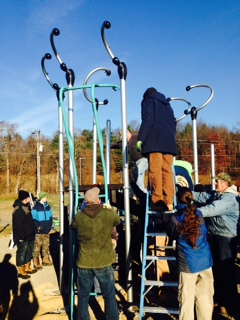 Volunteers started working to assemble the playground equipment bright and early on Saturday, despite the frigid temperatures.

Bernie Kozen, the main organizer for the effort to build the new playground, said he was pleased with the many volunteers who showed up to lend a hand. “They are helping a wonderful cause.” Kozen added that many area business people donated their time and services to assist with the playground.

Ross Township Supervisor Tina Drake was emotional as she described the playground marking a new beginning. “I’m big time excited about the turnout today. This means a lot to the community,” she said.

Dave Dion, a township parks and recreation board member, echoed that sentiment. “God gave us a great day. It’s really wonderful to see so many people out here supporting and giving their time to the community.”

“It’s wicked looking, in a good way,” said Ross Township resident Diana Ceaser, adding that the equipment reminded her of a “funky 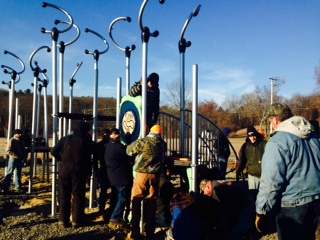 Kozen said he hopes people remember the Ross Township victims when they see the playground.

A playground dedication is planned for the spring.

Rethinking Ways to Get Kids Active