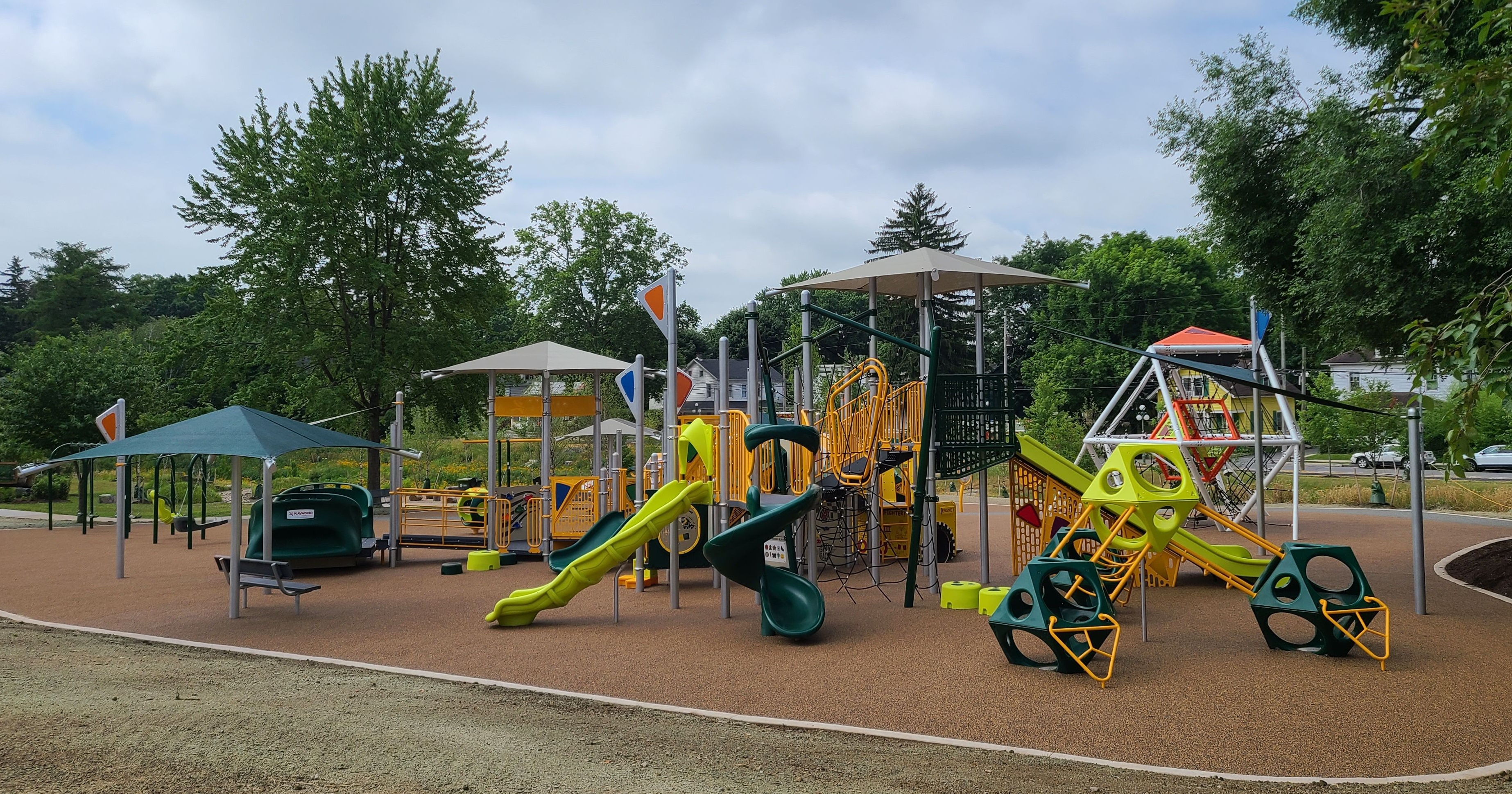 Lewisburg Borough officials were joined by other local dignitaries and leadership of PlayPower, Playworld’s parent company, at a dedication ceremony held last Friday at Hufnagle Park, part of the Bull Run Greenway.

“Playworld officially welcomes the people of central Pennsylvania to the Hufnagle Park Kidsburg Playground,” said David Sheedy, vice president of global sales for Playworld. “We could not be more proud of our community, and are thrilled to introduce this new play space as a local destination that challenges kids through unstructured, outdoor play, while celebrating the first responders who keep us safe.”

On May 4, 2021, firefighters from Lewisburg’s William Cameron Engine Company and 12 other fire departments from the surrounding region extinguished a fire on Playworld’s Buffalo Road campus, ensuring the safety of Playworld employees and the productivity of its factory. Playworld donated the Kidsburg playground equipment to express its appreciation of those individuals, to honor anyone who volunteers to make the world a better place, and to create an innovative play destination that unites the local community.

Spanning 8,500 square feet of unitary safety surfacing by No Fault® Surfaces, Kidsburg includes many new playground elements in climbers, slides, swings, and shade for people ages 2 and up. PlaySoleil™ solar-powered lighting will illuminate the playground after-hours, shining light in a downward trajectory from atop the equipment.

Kidsburg marks the first-ever installation of the Quito™ freestanding climber, a geometric-shaped net named after the high-altitude capital of Ecuador. Quito allows children to scale, balance and teeter on the net, promoting physical and cognitive development such as motor skills and coordination as well as problem-solving and critical thinking skills. It also includes an easier passage to the center of the structure.

Swings include the Swing Along, a multigenerational face-to-face swing seat, as well as early childhood tot seats and an accessible swing seat. The Mighty Descent Slide with Prism Pass is the largest single-piece, rotationally molded slide in the world and allows for multiple children at a time. The play space also includes PlayTown™ playhouses designed for children 2-to-5 years old.

“We thank the local leaders for embracing Playworld’s vision for Kidsburg, which we expect to serve as an important community resource and gathering place for years and years to come,” said Bryan Yeazel, CEO of PlayPower®, parent company of Playworld. “It’s time to play.”

Playworld exists to unite communities through innovative and authentic play, creating equal play opportunities for all. A division of PlayPower®, Inc., Playworld dedicates itself to craftsmanship, innovation and inclusive design, instilling optimism that unites communities on common ground -the playground. To learn more, visit Playworld.com.

We use cookies to improve your browsing experience! By continuing to use this website, you agree to the terms outlined in our Privacy Policy, and to the receipt of targeted communications through our marketing platforms. We do not sell your personal information, but are required by law to provide the following link to you: Do Not Sell My Personal Information. For more details, please refer to our Privacy Policy.
Ok